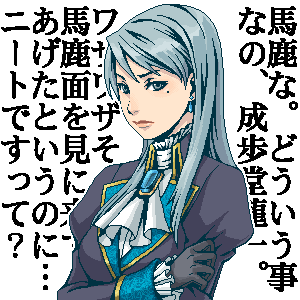 Busy with her duties in Germany, it's been two years since Prosecutor Franziska von Karma came to the US. After a visit to Edgeworth and the police department, she's having a quiet meal alone at a nice little indochine pasta restaurant. She's just sat down and is looking over the menu with a glass of expensive grape juice.

*the beginning of 2012, and it's a lovely way to close the night; Head Detective Damon Gant stands in front of the transparent side of a one-way mirror, silently peering into one of the interrogation rooms at Police Headquarters. As is usual when he is alone, there's a serious look on his face as he observes the individuals on the other side*

Event: What it says up there, pardner
Era: A couple months after SL-9
Characters Permitted:


*wakes up when the morning sunshine hits his face. He's lying naked in his bed, in his apartment, sporting a hangover so intense that he winces when he tilts his head to avoid the light.

When he tries to recall the events of the previous night, there's a rather large blank sometime after his fifth or sixth shot of whiskey over at the bar he'd been frequenting on a nigh daily basis as of late. It doesn't take a detective to piece together what happened--he'd consumed more than usual, and instead of just vaguely remembering the stumbling trip home, the memory is just not there.

Shoving himself up to a sitting position, Jake ignores the protest of his nerves. His clothes are piled up on the floor beside the bed--that's no surprise, and he picks a pair of clean(?) boxers from another pile nearby, puts them on, and plods towards the direction of the kitchen. His mouth feels dry and ashen, and he needs a drink--of water*

*after surviving his miraculous fall into the Eagle River, Phoenix Wright lies sprawled out on a hospital bed, shivering, tossing and turning as he lapses in and out of a feverish sleep.

Every time he jolts awake, he seems to repeat the same few actions--his eyes open wide and he makes a frantic clutch at the demon-warding hood he's still wearing over his head, as if to make sure it's still there. Then he calms down, lays back against the pillows, and shortly thereafter blacks out again.

At the current moment, he is unconscious and murmuring a name incoherently in his sleep*

It's the middle of the year 2013, and Jake Marshall has now been going steady with Lana Skye for half a year -- and monopolizing much of her free time. Tonight, unlike their usual arrangement of meeting at the restaurant, he arrives at the Skye residence to pick up his date. Unsure of what to press to ring the...buzzer? he politely knocks on the door.

It's noontime, and recesses have been called for all the ongoing trials of that day. Detective Lana Skye exits Courtroom #3, a bundle of files in her hands, and makes her way down to the cafeteria in the building.

There's already a long lineup for the cafe, and so as she waits in line she reviews the well-filled pages of a lined notepad, clearly deep in thought about the case....

*Jake Marshall, clean and sober and sporting a cool haircut because his default icons are inactive, opens up the lobby doors for any and all*

Event: The California State Law Offices Semi-Annual Semi-Formal Mega Bash
Era: Pre-JFA/TT/AJ, sometime between October 2016 and February 2017
Characters "Invited": All folks with a connection to law enforcement: State and Freelance Attorneys and their Assistants, Bailiffs, Judges, Police Officers, Detectives, etc....
Characters PERMITTED: ... However, this doesn't mean the party won't be privy to gatecrashers and such. Not to mention time paradox repeats/kids/dead peoples/APOLLO(s). So, really, everyone's invited!

[Socializing? Not exactly Edgeworth's thing. He's being obvious enough about it sitting at the corner of the Gatewater Hotel's grand ballroom nursing his never-ending glass of red Cote du Rhone, but he might just be a really quiet drunk. Or something. It'd be hard to tell now that they'd dimmed the lights and started playing some of the more upbeat music...

Edgeworth casts a lazy eye over the crowd, wondering if he should at least try to find a few familiar faces before heading home for the evening.]

*Ron is in a coffee shop right next to the courthouse (called "Grounds for Appeal") and reading the daily paper there, when he very nearly spills his milk tea*

How dare you attempt murder in my costuuuuuuuume!!
Collapse